The different M badged cars can be a little confusing to some people but in brief most models come with an M-Sport trim available which basically gives you a sportier look inside and out compared to the lesser specified models in the range and add some driving performance changes in the form of lower sportier suspension and brake options. The full M cars such as the M3 etc offer massive performance, drama and drivability. Sat

somewhere in the middle ground marketed as ‘The best of both worlds’ is the M-Performance range. This range offers increased performance and a sharper drive without the compromises of living with a full M car, well that is the theory at least. After spending a day with both the BMW M3 and the 440i M-Sport in the last couple of weeks I was interested to what the M240i offered in the way of driving pleasure.

The M240i starts at just over £37000 in coupe form and for that you get a car with 335bhp and capable of 0-62mph in 4.8 seconds (4.6 in automatic form tested here) and a top speed limited to 155mph. The 2 series is also available as a convertible. This is the same engine as in the 440i I drove the week before but it is slightly more powerful with an extra 14bhp and is around 70kg lighter than that car meaning it is half a second quicker to 62mph.

Despite the extra performance both on paper and in practice, I found  the sensation of speed actually seemed a little less in the 2 series and the engine didn’t sound quite as loud as the bigger car despite both being equipped with the M-Performance exhaust system. Being the M performance model I was quite surprised by this. I expected the refinement levels to be higher in the 4 series but that small weight saving and extra few horse power seemed to deliver a smoother more pleasing power delivery in the M240i. Both cars are extremely rapid. Who would have thought ten years ago we would have hot hatchbacks that accelerate quicker than the supercars of the day? On the road you really need no more. Running costs were on a par with the 440i in terms of fuel economy with mid 30’s mpg dropping into the mid 20’s when pressing on.

Whilst the M3 might be in a different league to the M240i in performance terms you get a comprehensive chunk of the drivability of the M3 around the corners. Where the 440i felt like a ‘normal’ car the M240i felt scalpel sharp and willing to dart wherever you pointed it. The smaller size made it feel easier to place on the road and its ability to change direction was only let down by its slightly lose rear end. Whether it was down to the less weight or the tyres fitted the M240i felt more edgy and likely to lose traction than its bigger brother. I was frankly amazed at how well the M performance car handled and on this front how close it came to matching the M3 in this regard for a little over half the price. The brakes were fantastic as well with plenty of feel and great stopping power. 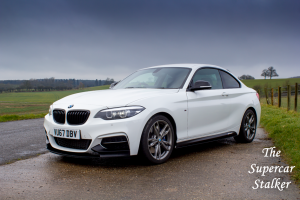 Where it could not match the M3 was in ride quality where the M3 in competition pack specification at least was able to provide a comfortable ride whilst providing incredible handling at the same time. The M Performance car had a very firm ride although it was still well damped meaning it didn’t crash over bumps and uneven roads but it was a very stiff ride on less flat B roads. The 4 series suspension was softer over all but also more likely to thump into imperfections. In reality both cars would have benefited massively from the optional adaptive dampers.

Aesthetically I have never been a big fan of the 2 series. I always felt it looked disproportioned particularly at the back but when I collected the M240i I was pleased to be greeted to a car in white with the black contrasting M-Performance body kit which transforms the car from a soft design to something far more purposeful. My one criticism on this aspect of the car and quite a few BMW’s actually, is the wheel size. For a sporty car they just don’t look big enough and really needed an extra inch to make the car stand out against the lesser models in the range.

wheel which was soft and grippy. There wasn’t much to distinguish this car from the M-Sport models inside but the seats were supportive and comfortable and the driving position perfect. Space is somewhat at a premium for rear passengers but this is not a car to buy if you regularly carry passengers in the back, even if they are children. At 6ft3inches my need for leg room meant the driver’s seat was almost touching the seat behind. Space in the front was more than adequate however and the boot was a decent size albeit hindered slightly by a small opening.

Whilst here we have been comparing the M240i against its bigger siblings, when comparing them to its competitors it really shines. Where rivals have to make do with 4 cylinder engines the six pot 3.0 is far more charismatic and with that sound comes smooth linear power delivery applied to the road through the rear wheels compared to the four and front wheel drive competition giving you driving pleasure few can match. 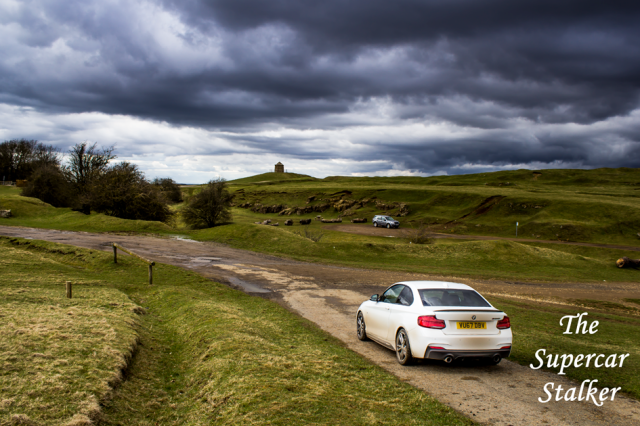 Whilst I’d heard great things about the M240i I was still surprised by just how talented the car was. For the money there can’t be many faster, more pleasing cars to drive down a windy road and it is perfectly livable every day with decent running costs and a fairly practical interior. I personally would save myself around £3000 and have the better looking and more practical M140i 5 door but if you like the looks of the 2 series and don’t need the rear doors, hatchback boot and extra rear seat the 4 seat M240i is a great car. And if you need something a little more hardcore? There’s always the M2 for you. How I would like to spend some time with that car!

Please be sure to like and comment  and with the day tomorrow to be spent driving my first hybrid, the X5 40e and 2-3 weeks driving the new X2 after that make sure you follow my blog so you don’t miss my experiences with these slightly different cars.

One thought on “The BMW M240i Reviewed”

Those quad pipes create a sweet tone and plenty of pops and crackles. The E53 sounds good!