It had been a while since I had been loaned a car to test and photograph so I was really pleased when BMW Warwick said they had an M140i I could take for the day. I really enjoyed the M240i I drove earlier in the year and this had the extra practicality of 5 doors (also available as a 3 door) and a hatchback boot I prefer in a car so was eager to see how it performed. The weather was far from onside so it was always going to be a challenge to capture the M140 at its best from a photograph and driving perspective.

The car was actually a 2018 M140i Shadow Edition with a few optional extras, the

shadow edition gaining tinted lights and windows as well as blacked out accents and wheels plus lots of extra kit inside as standard. Being an M140 it had the 3.0 litre six cylinder turbocharged engine with 340ps/hp and 369ft-lb of torque all sent through the rear wheels. This gives it a 0-60mph time, in the dry at least, of 4.5 seconds in automatic form as I tested or 4.6 if you have a manual transmission. Either way the car is limited to 155mph.

In the UK you can only have the M140i in rear wheel drive which is both one of its most attractive attributes but also one of its biggest caveats. Whilst it gives us petrol heads that perfect front engine rear drive layout pleasing purists and drift kings alike it made it very difficult to exploit even a fraction of the power during the monsoon conditions that I faced for the first couple of hours. In a country that has long wet winters that may take away some of the shine of owning this car. It certainly dampened my experiences a little. As soon as it’s dry however, the inability to deploy its power is forgotten as it powers you down the road with surprising velocity pulling hard throughout the whole rev range. It isn’t a car you need to thrash to get good performance from.

340hp in a small car makes it almost full M car fast at legal speeds and it surprised me on several occasions just how quick it was once the roads had dried up. The corners, which 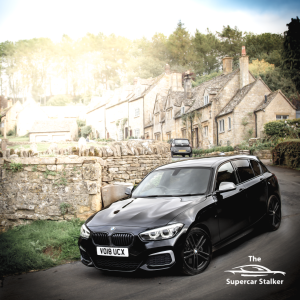 come to you at some rate thanks to all that power, see the floored wet weather attributes quickly forgotten. Rear wheel drive and a BMW engineered chassis make this an excellent car to drive along twisty roads. There isn’t much body roll and everything just feels balanced and right. There is some pay off in the ride quality stakes. The car I drove didn’t have the adaptive dampers and if I were to ever own one of these cars it would have to have them. That’s not to say the ride is terrible, it’s actually very good in most situations for a car of this type, but get to a bumpy B road and things start to jiggle that really shouldn’t be jiggling with such vigour. Despite this the car remains well damped an doesn’t crash over big bumps and compared to some of its rivals is far more bearable. The gearbox is excellent in automatic mode but I found it wanting a little when your pressing on being particularly slow on the downshifts and no giving you gears when you wanted them. The box in my X1 is far superior which seems a shame when the M140i is the performance car. The X1 got a gearbox upgrade just before mine was built so it make have made its way into the 1 series as well which would make for a vast improvement. 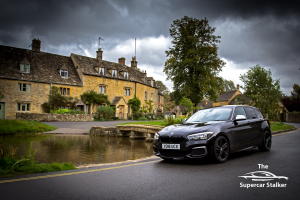 Whilst it might be M car fast it’s important to remember that this isn’t a full M car like the M2 is for instance. It doesn’t feel as sharp to drive or as aggressive in the way it deploys its power and certainly doesn’t have the M2’s traction. For me, especially from the side and front it looks a little too  tame for an M-Performance car although I’m sure the M-Performance Body Kit would make a big difference on that front and the biggest things for me is the wheels just look too small. The fact they are black doesn’t help but the looks as a whole are far too similar to a 116d M-Sport. That might be a plus for some people but I’d like a tiny bit more aggression. My other big criticism is the sound. It makes a lovely noise and a few pops and crackles in Sport mode but it was desperately crying out for the M-Sport exhaust. I had that fitted on the M240i I tested earlier in the year and the transformation is enormous. 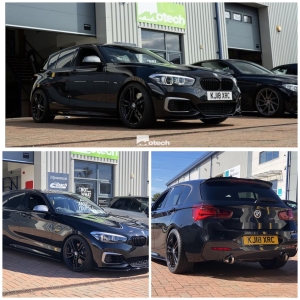 I know a company called Motech Performance Ltd do a package that lowers the ride
height of the car and puts spacers on the wheels which makes the car look more aggressive and also offers a LSD (limited slip diff) which would help with the traction issues. A Remus exhaust system completes the pack and I can imagine with those upgrades the car would be a fantastic performance bargain. I’d be very interested in trying one to see the difference for myself. At the very least I would recommend the adaptive dampers as well as the M-Performance Kit and Exhaust.

The car itself isn’t huge but that’s a good chunk of the appeal of the M140. It seats 4 people relatively comfortably which can’t really be said for its 2 series sibling and has a decent boot with good access through the hatchback. The interior is typical BMW in design and finish so logically laid out and good quality materials well put together. It would be an easy car to live with day to day. 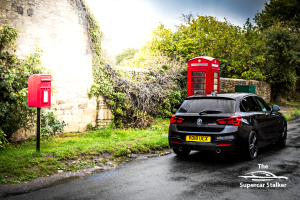 When I got in the car the trip computer hadn’t been reset for over 2000 miles and was showing a 29mpg average which isn’t terrible on a car like this especially when you confirm this is a demonstrator and has likely been driven hard at times. During my day with it I averaged around 25mpg but that included a lot of stopping for photographs and thirsty B roads. I didn’t spend a huge amount of time trying out the different driving modes or interior equipment because it is all the same as in the M240i I drove earlier in the year so check out that review as well.

So what did I think of the M140i? I would really like to spend some more time with it when the roads are dry because I feel like the sheer amount of rain dampened not just the ground but my enthusiasm for the car as well. When the conditions are right it is an extremely fast small hatchback that offers something different to the usual hot hatch offerings being rear wheel drive and having 6 cylinders. It sounds great with the right exhaust fitted and is practical as a hot hatch needs to be. It handles well and has a decent ride most of the time and is the type of car I would usually love and with a couple of upgrades to the look and sound it would be a car I would consider owning one day. It’s only a little more expensive than most of its rivals but has an interior they can only dream of having and used prices are extremely attractive as are discounts and finance deals on new cars. If only we were offered X-Drive on the M140i then it would be hard to beat it as an all weather performance daily.  As it is, it’s an excellent hot hatch. Just be gentle with the throttle when it rains.

Please remember to subscribe and follow this blog and also Rybrook BMW Warwick for supplying the car for me to test. 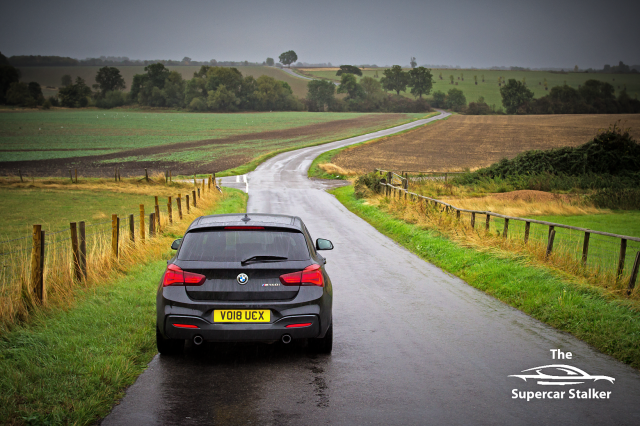